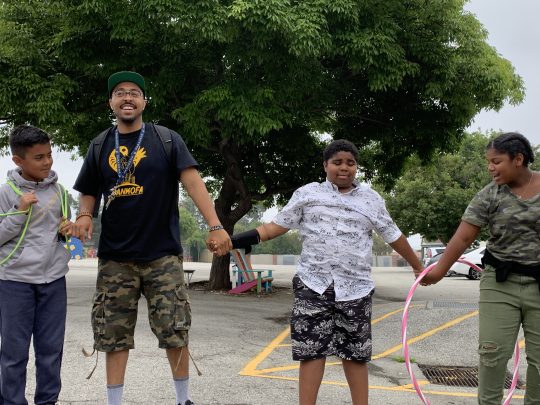 Courtney Linsey’s grandfather was a bishop for the Christian Episcopal Methodist Church, went to high school with the Rev. Dr. Martin Luther King, Jr., and was once even arrested with him for civil disobedience during one of King’s many protests against segregation during the Civil Rights Movement. One would think with a grandfather like that, Courtney’s path would have been clear from the start. But it wasn’t. It took a while before Courtney grew into his roots.

He was a social teenager and did what teenage boys do. When he finally went to college, he started to see the world a little different. His first year at Cal State Fullerton was sprinkled with racism and it was where he got his first real exposure to activism.

Several years later, he learned about the Children’s Defense Fund Freedom Schools® program and went to its national training. Coming from a college where Black students made up only 4.5% of the population to a training where 90% of the more than 1,000 college students were African American was a rousing experience for Courtney. “It was mind-blowing, empowering, life-changing, all that,” he said. “Because it gave me a glimpse of what our communities could look like and what all Black folks can be like.”

Courtney — who served as a servant leader intern (SLI) teaching the students in the classroom for five years and also has worked in an administrative leadership capacity for two years as a site coordinator — said the experience of the CDF Freedom Schools program helped refocus his life. Courtney is also an Ella Baker trainer with the program. Ella Baker trainers provide leadership on a national level by providing technical support, conducting training and teaching servant leader interns how to deliver key program components.

Being a trainer, Courtney says, makes him feel even more empowered. He often talks to people about the historical context of the program and the benefits like the intergenerational leadership, civic and social engagement, and high academic enrichment. Not only has the program helped refocus Courtney’s life, it also helped him get his teaching job. While working as an SLI at Altadena Elementary School, the school principal came and observed his classroom. She was impressed and offered him a job. Courtney has incorporated many CDF Freedom Schools practices in his classroom and has done the same at his church where he serves as a youth minister.

It may have taken some time but in his own way, Courtney is continuing his family legacy and making his ancestors proud.